How I Declare My class And Why

When I first learned C++ decades ago, I was taught that data members should be private and appear at the bottom of the class declaration. The rationale for this was that the data members were just implementation details, and less important than the class' API.

And I followed this rule for decades ...

But I've since come to the conclusion that this is exactly wrong.

When I'm reading a class declaration, the very first things I want to know are:

Note that this is an ordered list: top priority is listed first.

Why is it so important that I first learn about resources?

Once I know that a class owns a dynamically sized array of integers, or several strings, or a pointer to an incomplete class, or whatever, I immediately start to get a feel for what this class does. Getting an overview of the data members and their names gives me that first impression:

Even if the definition of the destructor is not visible (and it shouldn't be at this point), just the existence of the user-declared destructor, combined with the list of data members, usually gives a pretty good general idea of what a class owns or doesn't own. ~tzdb_list() apparently needs to do something with the head_ data member which is an atomic pointer. The most likely scenario is that it is going to delete one or more tzdb.

year_month_day clearly has a compiler-declared destructor, otherwise it would appear prior to the default constructor. And this means that simply running the destructor for each data member (still clearly visible) is sufficient to destruct the year_month_day. Indeed, having the data members close by is key to understanding what the compiler-provided special members do!

With the data members and the destructor known, and knowing nothing else about a class, I know what resources a class owns. And no other information is as important and concise as this for a quick overview of a class's purpose.

Next, and only if it needs to be user-declared, I list the default constructor.

In the above example for class day it is easy to see that ~day() is compiler-provided, and is trivial because of the single unsigned char data member. And that it has a trivial default constructor that works just the same way as default constructing an unsigned char. We've only looked at a few lines of code of class day and we already know a lot about it.

As we get into more complicated class types, readability becomes more and more important. In the above example, we can see that something non-trivial needs to happen in the destructor, likely leading to ownership of the two pointer data members.

We can also see that the default constructor consists of the state that both pointer data members are set to nullptr. This constructor is implicitly both constexpr and noexcept.

And we can see that this class is copyable, but (most likely) not trivially copyable. However we can copy without risk of throwing exceptions! Except for the descriptive name shared_ptr we do not yet know exactly how this class copies, but we do know that it can be copied.

In the above example we can quickly see that ptr_ is likely an owned resource because of the user-declared destructor. And that the type is default constructible by setting ptr_ to nullptr. We can also quickly see that unique_ptr is not copyable because the copy members are noticeably missing between the default constructor and the move members. User-declared move members will implicitly delete the copy members. With very few lines of code we can quickly see that unique_ptr is a move-only type that owns a resource.

No matter how you declare your class and its special members, unit tests are the place to be verbose.

In each case, readable and concise in the declaration, thorough and verbose in the unit test. 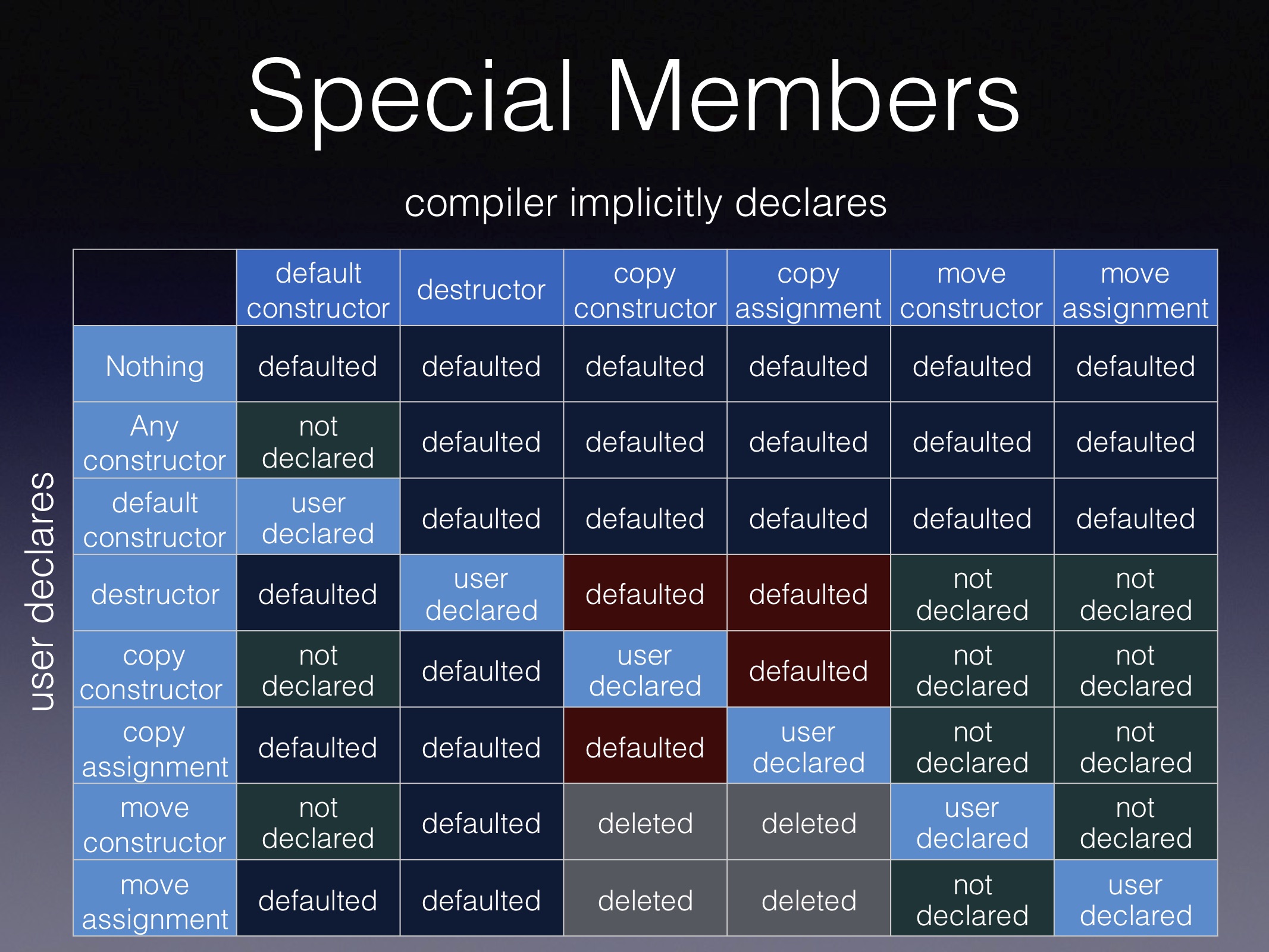 See this presentation for a detailed description of this table.